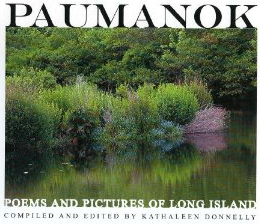 Several of my poems have been featured in Paumanok: Poems and Pictures of Long Island, compiled and edited by Kathaleen Donnelly and published by Cross-Cultural Communications.

Paumanok: Poems and Pictures of Long Island, is an anthology of 105 poets and 66 photographers, whose lyrics–one poem for each of the 366 days of the year (including the leap year)–and images traverse the length and breadth of Long Island–its land, its sea, its sky–visions of the past and the present, which artistically document its physical and imaginative qualities. It’s the first such comrehensive combination in word and photograph in book form, a coffee-table book meant to grace the living room of every Long Islander.